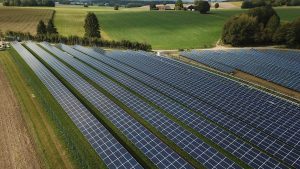 Building Integrated Photovoltaics (BIPV) system is the integration of photovoltaics (PV) into the building envelope and part of building components such as roofs, skylights, façades, or windows.

The photovoltaic materials are used to replace conventional building materials and convert solar energy into electricity for on-site use or export to the grid. They also have some other functions such as thermal insulation, weather protection (waterproofing, sun protection), noise protection, etc.

BIPV systems are increasingly being incorporated into the construction of new buildings because they have lower overall costs than non-integrated PV systems. BIPV systems avoid the cost of conventional materials so the cost of PV materials is reduced and their life-cycle cost is improved.

Solar windows are a form of Building Integrated Photovoltaics (BIPV). They are windows with built-in solar cells.

Solar windows feature photovoltaic glazing and not only provide a clear view, but also convert sunlight into renewable electricity for the building. Efficiency levels are between 12% and 15%.

It is also possible to retrofit existing windows by buying a photovoltaic film and applying it to window glass. The film is made from mostly organic materials, such as carbon, nitrogen, hydrogen, and oxygen.

Transparent solar panels are another innovation in the solar technology.

Another type of Building Integrated Photovoltaics is solar shingles. The solar shingle idea came from DOW Chemical Company, who first unveiled it in 2009.  In October 2016, the company Tesla entered the solar shingle industry in a joint venture with SolarCity. In 2017, Tesla began marketing their solar shingles (Solar Roof tiles).

Solar shingles are solar roofing products that function as mini solar panels and are designed to look like conventional roofing materials. They resemble the size and shape of regular asphalt shingles or roof tiles and blend aesthetically with the roof unlike the bulky solar panels mounted on the roof.

An integrated, single-piece solar rooftop made using laminated glass is another innovative product that some companies offer.

Solar paint is an innovation in solar energy technology that promises a much cheaper and easier way to use solar energy.

There are a few different types of solar paints that are in development now, and each has its own unique way of producing energy. Most solar paint prototypes contain liquids with photovoltaic properties so that they can capture the sunlight and transform it into electricity.

Currently, the tree solar paints type that has the most potential are:

A disadvantage of solar paint is its efficiency (3 to 8%), new efficiency record of 13.4% for a quantum dot solar cell is still much behind that of silicon-based solar panels (20 to 25%).

Solar paints are not yet available to consumers, but with further research they may be on the market soon.

A portable solar lighting kit is helpful as an emergency light whenever required. It is also useful as portable light for campers and hitchhikers. Typically, such a kit provides power output in 3 – 10 W and has a rechargeable battery. Read more: economictimes.indiatimes.com/small-biz/productline/power-generation/solar-lighting-kit-extremely-useful-as-emergency-lights-or-portable-lights/articleshow/69198210.cms?utm_source=contentofinterest&utm_medium=text&utm_campaign=cppst

Portable solar power helps people in developing countries who lack access to electricity and those who survived disasters.

An example of solar transportation is a solar-powered car. In one of my previous posts “5 Partially Solar-Powered Cars You Can Buy”  you can read some interesting information regarding solar cars. There are also solar trains, solar planes, solar yachts, solar bikes, solar scooters, etc.

Solar desalination is an environment-friendly technique to produce drinking water from the sea using solar energy. There are two common methods – direct (thermal) and indirect (photovoltaic).

The salt from the water is removed via a specially designed still that uses solar energy. The produced heat boils seawater and captures the water vapor, which, is in turn, cooled and condensed into fresh water.

Another solar desalination method is reverse osmosis. It is a pressure-driven process that separates fresh water from other substances via a semi-permeable membrane. It is used in large solar-powered plants.

Solar desalination could be helpful for millions of people around the world who do not have access to fresh drinking water (coastal community, low-income people, people in developing countries, survivors of various disasters).

Saudi Arabia meets much of its drinking water needs by desalination. Years ago, the country started to use the power of the sun to produce fresh water.

Bifacial solar panels produce electricity from both sides of the panels – front and backside, as they can collect sunlight reflecting from the ground. Thus bifacial solar modules perform best when mounted near reflective surfaces. For example, light-colored roofs, white tiles, swimming pools, desert sand, and much more. Bifacial solar panels are also perfect for homes with limited space due to their ability to generate more power.

Bifacial solar panels aren’t something new. Bifacial solar technology  is dating back to the 1960s and 1970s. but only with the development of Passivated Emitter Rear Cell technology their popularity had increased because it helped increase their efficiency rate (between 20% to 40%).

Currently, the market is dominated by mono facial (traditional) solar modules. Predictions are that by 2029, bifacial solar modules will make up 50% of the market share. Source: solartechadvisor.com/bifacial-solar-panels/

There is an increasing interest in perovskite solar cells because, unlike silicon solar cells, they can be mass-produced through roll-to-roll processing. In addition, they are light, colorful, and can be used in non-traditional settings such as windows and contoured roofs.

Perovskite solar cells are considered the future of solar cells since their specific crystal structure has shown a great potential for high conversion rate and low production costs.

In recent years, a new technique regarding solar panel installation emerged – installing solar panels on farmlands to produce clean electricity from the sun to help farmers minimize their utility costs. Farmers can also sell excess clean electricity to the grid and develop a form of passive income. At the same time, a huge array of crops are growing underneath the solar panels – peppers, tomatoes, beans, carrots, kale, garlic, radishes, lettuce, and more.

Putting solar panels on farmlands and planting crops underneath is a new scientific field known as agrivoltaics – agriculture plus photovoltaics (“agri-“ relating to food production, “-voltaic” relating to electricity production).

We all know that plants need sunlight, but some need less than others. We can shade those crops and that means they will require less water, which rapidly evaporates in an open field. In addition, plants “sweat” through a process called transpiration, which makes the solar panels overhead cooler and boosts their efficiency.

There is no need agrivoltaics to be limited to the kinds of crops people eat. The farmers might let native grasses grow wild under the panels, providing food for livestock like cattle and sheep, which would also benefit from the shade. Source: www.wired.com/story/growing-crops-under-solar-panels-now-theres-a-bright-idea/

A floating solar power system (also called floating solar, floating photovoltaic) is a term that describes solar panels mounted on platforms that float on top of a water body surface, usually reservoirs or lakes. The clean electricity is sent from this floating solar structure via submarine cables to a transmission tower.

Although most floating solar systems are built on calm water, such as reservoirs and lakes, there are also sea-based systems. In 2014, Swimsol  launched the world’s first floating solar power plant for the sea (SolarSea) in the clear blue waters of the Maldives. Source: www.energywatch.com.my/blog/2020/10/11/10-illuminating-facts-about-floating-solar-power/

Solar power stations in space or the so-called space-based solar power (SBSP), is an innovative and interesting concept. It means capturing solar power in outer space and distributing it to Earth. Read the post “Solar Power Stations in Space – Science Fiction or a Future Reality?”  to learn more about this concept.