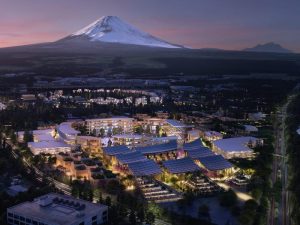 The construction of a sustainable “city of the future” called the Woven City, is a piece of interesting news that comes from Japan. The prototype city, announced last year at the Consumer Electronics Show (CES) in Las Vegas, will be powered by solar panels and hydrogen fuel cells.

In 2020, the world’s largest automaker Toyota has revealed plans to build a prototype “city of the future”, covering 75- acres on the site of a factory that is due for closure, at the base of Mount Fuji in Japan. On February 23, 2021, a groundbreaking ceremony took place to mark the start of the project’s construction. “The Woven city project officially starts today,” said Toyota Motor Corporation president Akio Toyoda.

The former Higashi-Fuji car factory of Toyota Motor East Japan is being transformed into a new smart city. The city (about 60 miles from Tokyo) will become a living laboratory for self-driving vehicles, robotics, personal mobility, smart homes, and artificial intelligence. Woven City would be home to about 2,000 full-time residents, mainly Toyota employees and their families, retired couples, retailers, and researchers who will be able to test and develop technologies. Scientists, engineers, and researchers from around the world are also invited to come work on their projects in a real-world environment.

“We welcome all those inspired to improve the way we live in the future, to take advantage of this unique research ecosystem and join us in our quest to create an ever-better way of life and mobility for all,” said Akio Toyoda.

The name Woven City comes from the three different types of streets in the city: one for self-driving vehicles, one will be shared by pedestrians and slower personal mobility devices like e-scooters, bikes, Toyota’s i-Walk, and one for pedestrians only. These three types of streets, will “weave together into a woven grid of 3 x 3 city blocks… each framing a local park or courtyard”. There will also be one underground road used to transport goods. In a city with no private cars, the transportation, deliveries, and retail will be sustained via e-Palettes – Toyota self-driving vehicles.

Toyota has a plan to integrate nature throughout the city with native vegetation and hydroponics – a method of growing plants without soil. A large central park for recreation, neighborhood parks, and a central plaza are designed to bring the community together. Toyota believes that encouraging human interaction in natural meeting places will be an equally important part of this project.

The grandson of the carmaker’s founder Akio Toyoda described the utopian vision as his “personal field of dreams”. “With people, buildings and vehicles all connected and communicating with each other through data and sensors, we will be able to test connected AI technology… in both the virtual and the physical realms… maximizing its potential,” said Akio Toyoda.

According to the company’s plans, residents of Woven City will live in “smart homes”, with in-home robotics to assist with daily life and sensor-based artificial intelligence to monitor their health. These “smart homes” will take advantage of full connectivity using sensor-based AI to automatically restock your fridge or take out your trash.

The community of the futuristic city will reduce carbon dioxide emissions from vehicles and buildings and use internet technology in practically every aspect of daily life. Toyota said the city will be “fully sustainable”, with buildings made mostly of wood to minimize the carbon footprint. “The rooftops will be covered in photovoltaic panels to generate solar power in addition to power generated by hydrogen fuel cells.” Below ground will be hydrogen power storage and water filtration systems.

In this smart city project, Toyota is partnering with ENEOS, a leading hydrogen energy company, with 45 commercial hydrogen refueling stations in major cities in Japan.

Japan has ambitious plans to be entirely carbon-neutral by 2050 and the government hopes hydrogen can help to achieve their goals. Toyota unveiled the world’s first mass-produced hydrogen fuel cell car in 2014 and launched its second-generation Mirai (Japanese for “future”) last year.

The smart cities concept is not something new to Japan. Fujisawa Sustainable Smart Town was built on the site of an old Panasonic factory and was opened in 2014. The town is home to about 2000 people. Every house has installed solar panels and it is also equipped with smart monitoring systems. Thus, residents can monitor their energy consumption both at home and on a community-wide level. Fujisawa was certified as a “Business for Promoting Town Development in Harmony with the Environment” by Kanagawa Prefecture.

Another example of a Japanese eco-city is Kashiwa-no-ha. The town’s smart grid facility includes one of Japan’s biggest lithium-ion storage cell systems, as well as solar and emergency gas-powered generators. The city, besides environmentally friendly, is also proclaimed as a city ”where people of all ages can enjoy a healthy and secure life”.

The Woven City is one of a few innovative projects for a smart city of the future currently underway in Japan. The Woven City was designed by Bjarke Ingels, the Danish architect whose architecture studio BIG designed the 2 World Trade Centre building in New York and Google’s offices in Silicon Valley and London.