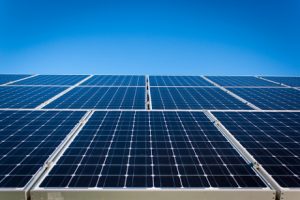 Image credit: pixabay.com
Last month I read something interesting in the news concerning solar panels and I decided to write a post about it in my blog. It is something new in solar power technology – gel-like material makes standard solar panels “sweet” to cool themselves. Liangbing Hu, a materials scientist at the University of Maryland, College Park says: “it’s a simple, elegant, and effective way to retrofit existing solar cell panels for an instant efficiency boost.”
Typical silicon solar panels convert approximately 20% of the sun’s light into electricity. Much of the rest turns into heat, which can warm the solar panels by as much as 40°C/104°F. As we know, the heating of the panels is one of the most serious problems – solar panels are much less efficient when overheated. In fact, with every degree of temperature above 25°C/77°F, the efficiency of the solar panel drops.
In recent years, researchers have devised materials that can suck water vapor from the air and condense it into liquid water for drinking. Among them are researchers at the University of Texas who have created a new gel-like material. Initially, the gel was created to produce clean drinking water. It proves its effectiveness and has the potential to provide a clean, sustainable water source for millions.
The gel-like material is a mix of carbon nanotubes in polymers with a water-attracting calcium chloride salt. This substance absorbs water vapor at night when the air is cold, and humidity is high. Then it causes the water vapor to condense into droplets that the gel holds. When the heat rises during the day, the gel releases water vapor. If covered by clear plastic, the released vapor is trapped, condenses back into liquid water, and flows into a storage container.
Peng Wang, an environmental engineer at Hong Kong Polytechnic University, and his colleagues figure out another use for the condensed water: coolant for solar panels. So, the researchers applied a 1-centimeter thick sheet of the gel against the underside of a standard silicon solar panel. Their idea was that during the day, the gel would pull the heat from the solar panel. It initiates an evaporation process for the water it pulled out of the air the previous night, releasing it through the bottom of the gel layer. Thus the gel-like material can make solar panels “sweat” and cool – just like sweating cools the human body. The amount of gel needed per panel depends on its size and the temperature and humidity in your location. In a desert environment with 35% humidity, a 1-square-meter solar panel required 1 kilogram of gel to cool it. In a muggy area with 80% humidity, only 0.3 kg of the gel is needed per square meter solar panel.
The temperature of these solar panels can drop to 10°C/50°F, and the electricity output of the panels can increase by 15% to 19%. In the area of solar technology, this is considerable. “In a field where engineers struggle for every 0.1% boost in power conversion efficiency, even a 1% gain would be an economic boom,” says Jun Zhou, a materials scientist at Huazhong University of Science and Technology.
One disadvantage of this solution is that rain could dissolve the calcium chloride salt in the gel, sapping its water-attracting performance. Peng Wang acknowledged this as a possible problem, despite the hydrogel sitting beneath the solar panel, and being somewhat shielded from the rain. He said he and his colleagues were working on a second-generation gel that would not degrade, even when wet.
The team is also looking at another design option that could trap and re-condense water after it had evaporated from the gel – and potentially using the collected water to clean solar panels from the dust.
Currently, over 600 gigawatts of solar power exist worldwide, providing 3% of global electricity demand. This number may increase by about five times over the next decade.
Source: sciencemag.org