Photo by Alex Csiki from Pixabay

The solar inverter converts direct current (DC) electricity generated by your solar panels into usable alternating current (AC) electricity used by household appliances. If you have decided to go solar and install solar power system for your home, you have to do some research and have an initial knowledge about the solar inverter.

String inverters are central inverters and they are the most commonly used inverters for home solar power systems. When few solar panels of the same output voltage and power are wired together in series we have what is known as a “string”. All of the energy the panels produce is sent to a single inverter that is typically located on the side of your house, garage or utility room. String inverters are easy to install and maintain, and they also have the lowest price.

This type of inverter is suitable when your panels are not facing multiple angles and have no shading issues. The disadvantage here is that if one panel is in shade and suffers reduced output, every panel in the string drops to that reduced output.

Microinverters are small devices also known as module-level power electronics (MLPEs) that are attached directly to each solar panel, usually on the back. Thus they need to be designed to be resistant to humidity and heat. Microinverters convert DC power to AC right at the panel, providing a better performance of the solar array thus better performance of the whole solar power system. Just make sure the microinverter capacity matches that of the solar panel.

Microinverters allow you to monitor individual panel performance, giving you a more clear view of efficiency. Also, if something goes wrong with a particular solar panel, you can fix it easily. Because of all of this, and the need for multiple inverters, microinverters are the higher cost option. Besides that, another disadvantage is that they are located on the roof, so their maintenance is complicated.

Power optimizers are small devices as well that is located on the roof alongside or integrated with each solar panel, allowing for more accurate performance monitoring. But unlike microinverters, they don’t convert power from DC to AC directly. Instead, they simply “optimize” the DC electricity before it is sent to a string inverter for conversion into AC.

Microinverters and power optimizers (together referred to as module-level power) are gaining popularity in residential solar markets. It’s always nice to have options, and string inverters and MLPEs each have pros and cons.

The inverter sizing refers to choosing the right size of solar inverter for your solar power system. As a general rule of thumb, you’ll need an inverter that matches the watts of your solar panel installation, For example, if you have a 3kW solar panel system, then you would install a 3kW inverter. In the case of microinverters, the size of the inverters should correspond to the energy output of each solar panel they’re connected to versus the entire system.

If you plan to go off-grid, to choose the right inverter for your solar power system you must calculate the load your inverter can handle. You should know that inverters are rated in continuous/running watts and surge/peak watts. It’s important to consider both the continuous load and surge load when it comes to inverters (inverters have two capacity values printed on the manufacturer’s label: continuous watts and surge watts).

Surge watts are the amount of power the inverter can support for a very short time, usually no longer than a second when the appliance starts up. Appliances with motors require about 1.5 to 2 times the running wattage before the motor will start. Appliances and tools with induction motors such as refrigerators, freezers, air conditioners, microwave ovens, and pumps, need a much higher power level at startup. They may require a start up surge of 3 to 7 times the continuous rating.

Find out the appliance’s description and read the specific wattage requirements. If the wattage of the appliance is not listed on the specification, you may calculate the standard watts each of your appliances requires using the formula:

If the running wattage of your fridge is indicated as 600 watts, the surge wattage will be about 1,800 watts, but this surge is needed for only a fraction of a second. To run this refrigerator, you will need an inverter that can handle 600 running wattage and a surge of about 1,800 watts for a split second. At discount stores or home centers, you can find a typical inverter that provides 1,500 watts of continuous power and 3,000 watts of surge power. https://homeguides.sfgate.com/run-refrigerator-inverter-49672.html

For your inverter to be right for your system, its surge watts rating must be approximately equal to (or greater than) the potential surge watts of each appliance. You can find this out by looking at the label on the back of all of the appliances.

With an inverter, with a continuous rating of approximately 1500 watts and with a surge rating of approximately 3000 watts, you can run a wide range of household appliances simultaneously by managing the running load. You can run LED lights, TV, stereo, laptop, fans, fridge, and a microwave (depending on the wattage) at the same time. Just put a current display meter to check the running load before you switch on a new appliance.

It is also recommended to provide a safety room of 10% – 20% watts (more than your largest load) when sizing up an inverter.

Remember: always seek professional help for the installation of your solar power system because of the specific power needs and circumstances of every home.

Next post: How to Choose the Right Solar Inverter for Your Solar Power System (Part 2) 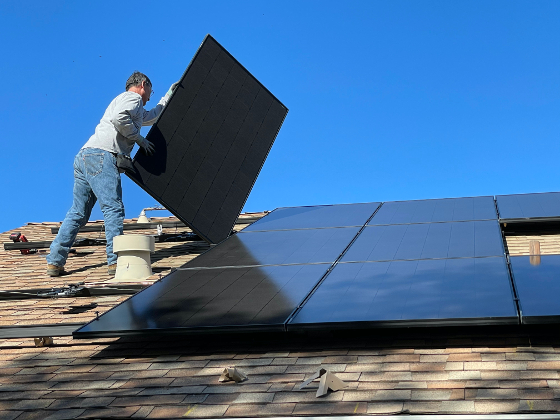