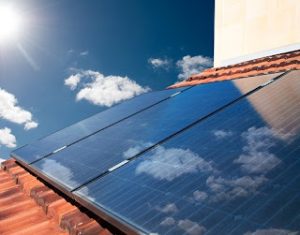 Even on cloudy days, there’s still solar energy send down to earth from the sun. And although solar panels don’t produce as much electricity as they do on sunny days, they have been shown to produce 25% of what they produce on a sunny day, or 10% when it’s very cloudy. The exact amount will vary depending on the density of the clouds, and may also vary by the type of solar panel – some kinds of panels are better at receiving diffuse light. SunPower solar cells, for example, have been designed to capture a broader range of the solar spectrum. By capturing more red and blue wavelengths, their solar panels can generate more electricity even when it’s overcast.

We may assume that solar panels thrive in hot, sunny weather, but too much heat can also reduce solar panel output 10-15%. The very hot climate isn’t the best condition for them. Most solar panels’ power outputs start to degrade if the temperature of the panel goes over about 25°C.

Solar power can work well in areas known for cloudy, cold weather. For example, New York, San Francisco, Milwaukee, Boston, and Seattle. These cites often have bad weather, from blizzards to rain and fog. However, each of these cities tops the list of those that see major savings due to solar power installations. And rain helps to keep the panels operating efficiently by washing away any dust, pollen, and dirt. Clean panels turn out the most electricity.

Germany is the fourth-largest PV market in the world that’s famous for its lack of sunlight. Germany accounts for about 25 percent of the world’s solar power output and achieved its strongest growth in half a decade during 2018, according to a recent Greentech Media article.

Going solar is about saving on your energy costs as well as helping our planet and the weather can’t be an obstacle.

And if we choose to rely on solar panels for our home electricity use, we can also use a solar battery system to save money by storing free energy for use when it’s cloudy or for night use. Solar batteries have been around for a while, but up until recently, the costs were very high, the equipment was bulky and they were difficult to use. Except for people who lived off the grid, they weren’t so good investment. But that has changed in recent years. The price of solar batteries has dropped and in many cases, they are now an excellent investment for homeowners in cloudy regions who want to reduce their electricity bills.