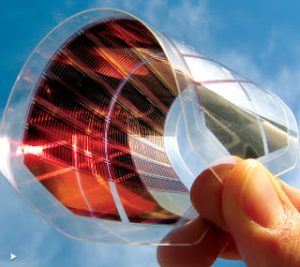 Organic photovoltaic devices are comprised of one or several layers including a photoactive layer between two electrode layers. These layers are printed using roll-to-roll manufacturing, similar to the way newspapers are printed, with thicknesses on the nanometer scale. Photoactive layers are typically printed on a thin plastic substrate followed by lamination with a protective and flexible foil.

For organic materials to become conducting or semiconducting, a high level of conjugation (alternating single and double bonds) is required.

Organic solar cells have several advantages over their traditional silicon counterparts. They are very environmentally friendly because they contain no toxic elements and can be processed at low temperature using roll-to-roll deposition, so can have an extremely low carbon footprint.

Conventional silicon solar cells are perfect for large scale electricity generation in solar farms and on the roofs of buildings, but they are not suitable for the electric vehicles and integration into windows on buildings. Organic solar cells can sit on curved surfaces, they are very lightweight, flexible and transparent.

Additionally, manufacturing cost can be reduced for organic solar cells due to their lower cost compared to silicon-based materials and the relative ease of chemical synthesis.

Organic solar cells are new types of flexible solar cells and they will become a commercial reality very soon because it will give the designers more choice in the materials they can use.