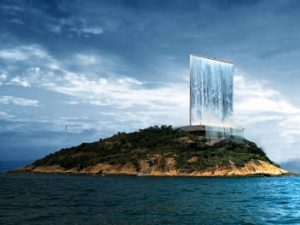 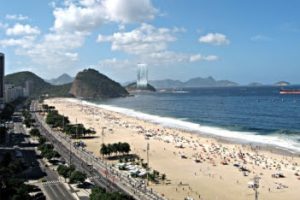 The 344.5-foot tall (105 meters) Solar City Tower is going to be located on the small Cotonduba Island in Guanabara Bay. The enormous waterfall is almost twice the height of Niagara Falls and will be large enough to accommodate the opening and closing Olympic ceremonies. It is one of the first buildings that are being designed for the 2016 Rio Olympics.

This solar energy generating tower will be using many solar panels to produse electricity for the Olympic village by day. Any excess energy would be used to pump seawater into reservoirs at the top, so that it can be released by night as a spectacular waterfall. The falling water would also help turbines create electricity for the nighttime village.
In addition to producing energy, the Solar City Tower would have an elevator to take visitors to the very top of the tower, where a “glass sky walk” offers panoramic views of the surrounding harbor and Rio. There’s even a platform at 297 feet (90.5) that provides bungee jumping. The giant tower would also house an auditorium, cafeteria, shop and amphitheater on the ground level.
The Solar City Tower is RAFAA’s entry in the International Architecture Competition for the 2016 Olympics, where the Brazilian metropolis aims to represent the green city of the future and hope to achieve its goal to host the first-ever zero-carbon Olympics.