Skip to content
Home President Carter Solar Heating Panels on the White House Roof
Still under the impression of the USA 2008 Presidential vote (although I am not an American) I found this information interesting to be published now.

Did you know that way back in 1979 (during the second US oil crisis) the American President Jimmy Carter installed solar heating panels on the roof of the White House West Wing? I personally didn’t know that curious fact! And it seems that the Nobel Prize winning President Carter was quite a visionary. 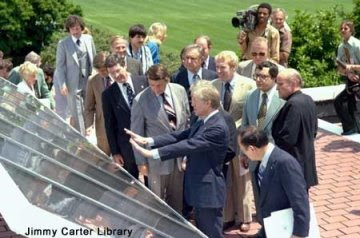 In July 1979, President Carter outlined his plan for achieving energy independence and improving energy efficiency in his “Crisis of Confidence” speech. In an effort to set an example for the nation, he installed solar panels on the White House roof. They were more as a symbol of a new strategy to reduce America’s dependence of foreign sources of energy and a move designed to support Carter’s solar institute, which he had “created to spearhead solar innovation.”

Carter called for 20 percent of American energy to come from solar power by the year 2000. He even had very generous tax reductions implemented for people who installed solar panels at home.

The solar-energy system that President Carter installed consisted of 34 solar collectors which were used to heat water for the staff eating area and some other areas of the White House.

At the time, President Carter warned “a generation from now, this solar heater can either be a curiosity, a museum piece, an example of a road not taken, or it can be a small part of one of the greatest and most exciting adventures ever undertaken by the American people; harnessing the power of the Sun to enrich our lives as we move away from our crippling dependence on foreign oil.” (It turns out Carter’s warning was at least partially correct: One of his solar panels is now museum piece.)

In 1986, President Reagan had the solar panels removed during a roof in repair and put them into a federal storage facility. Actually, the solar panels were supposed to be reinstalled but they never were.

In 1991, the environmentally-minded Unity College of Maine, found the panels in a government warehouse in Franconia, Va., bought them for peanuts and installed them to use for the generation of hot water in the student dining hall.

By 2004, the solar panels had worn out. Unity College kept one of the panels for “historical significance,” donated another panel to the Smithsonian Institute and offered the rest for sale.

Even a documentary film has been made about the solar panels, using them as a backdrop to explore American oil dependency and the political lack of will to pursue alternative energy. Swiss directors Christina Hemaner and Roman Keller follow the route of the panels in the hour-long film “A Road Not Taken.”

In 2003, the National Park Service, which manages the White House complex, installed a nine kilowatt solar electric or photovoltaic panels, on the roof of the main building used for White House grounds maintenance. Solar thermal systems were also installed to heat water: one for landscape maintenance personnel, the other for the presidential pool and spa.