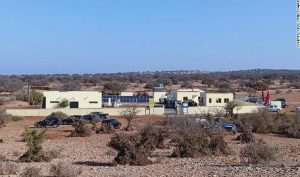 Thirty-two solar photovoltaic panels were installed to harness the sunlight and power the small village of Id Mjahdi, in Morocco. The village is situated on the sunny Atlantic coast, near the coastal city of Essaouira (around 190km to the west of Marrakesh), and it became the first entirely solar-powered village in Africa.

This news was reported by CNN in December last year but I found this inspiring and decided to write a post about it now. I think that solar energy can help millions of people in Africa to get access to cheap and reliable electricity and to improve their lives in all aspects.

According to the International Energy Agency, solar power may become one of Africa’s top energy sources. Of all solar power that is used globally, less than 1% currently comes from the continent Africa. Morocco already has 35 percent of its electricity needs from renewable energy sources (solar, wind, and hydroelectric power), and its goal is to increase the use of renewable energy to 52 percent by 2030, according to the International Renewable Energy Agency (IRENA). “Morocco is unquestionably a leader in sustainable energy,” says Francesco La Camera, director-general of IRENA.

Marocco already has the world’s largest solar concentrated farm, the Noor-Ouarzazate complex. The solar farm is built on an area of more than 3,000 hectares. The size of the farm corresponds to 3,500 football fields and produces enough electricity to power a city such as Prague, or twice the size of Marrakesh.

And now, Id Mjahdi was chosen for this pilot solar project to demonstrate how remote villages, which are expensive to connect to the power grid of the National Office for Electricity, could be powered with solar energy. The author of this project is Moroccan solar power company Cleanergy. Their idea was to electrify remote communities, and Id Mjahdi was chosen because they needed everything, according to the company’s founder, Mohamed Lasry.

The people in Id Mjahdi relied on candles for light, and they usually used them only around an hour for working or studying in the evenings. They used tree bark for heating and cooking, and Id Mjahdi did not even have a nearby source of water. The girls often missed school days to walk several miles to a well. It’s hard to believe that in the 21st century still have such places.

The first step of the project was to build a water tower for the community. The next step was to install 32 solar photovoltaic panels, which generate 8.32 kilowatts of electricity for distribution via a mini-grid. Around 20 homes in the village are connected to the solar mini-grid, serving more than 50 people. Each family was given a water heater, fridge, television, and oven. Each house was provided with an outlet to charge electric appliances. The solar network has also a battery, to store electricity for later use at night. The street lights in the village are also solar.

In October 2019, Cleanergy opened several solar-powered buildings – a hammam (public baths), a workshop providing jobs for women to produce argan oil, and an educational center for children between the ages of three to six, which gives the opportunity their mothers to work. The chance to have a job is another major benefit for the community.

The educational center comprises two classrooms, a sports field, and a playground. For adults are offered also, basic literacy classes.

At the village was created an association like a cooperative, and it owns the whole production. The association takes a small fee from the argan oil sales to maintain the solar network. Cleanergy trained the men and women in the village how to manage it.

Now Cluster Solaire is seeking funding to build more solar villages. There are 800 villages without electricity in Morocco alone, and the World Bank estimates that 840 million people lack access to electricity worldwide.

Id Mjahdi could be a model for other remote community which still lack access to electricity. Around 650 million people will lack access to electricity in 2030, according to the World Bank. It says that mini-grids could be the most cost-effective solution for remote areas, and have the potential to provide electricity to as many as 500 million people by 2030. With about $220 billion of investment, it is possible to build around 210,000 mini-grids. And they also help to save our planet: 210,000 solar mini-grids would help avoid 1.5 billion tons of CO2 emissions globally.