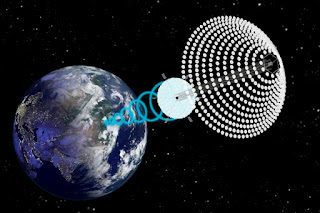 Generating solar power in space has many advantages. As we know, the Earth’s atmosphere absorbs and reflects some of the Sun’s light. A considerable fraction of incoming solar energy (55–60%) is lost on its way through the Earth’s atmosphere. So, solar cells above the atmosphere will receive more sunlight and produce more power as the Sun always shines in space. An orbital solar power station will be an inexhaustible source of clean energy.

One of the major challenges will be getting the power transmitted back to Earth. The idea is to convert electricity from the solar cells into microwaves or lasers and transfer them down to an antenna on the Earth’s surface. The antenna would then convert the waves back into electricity.

Recently, the UK government reveals an ambitious new plan for a space-based solar power station that could collect solar energy and beam it down to the UK. According to it, giant solar power satellites in orbit could harvest solar power and transmitting it as high-frequency radio waves to ground-based receivers connected to the electrical power grid.

The big question is how to launch such large structures into space. One possible solution is to develop many smaller satellites that could easily connect in space to form a single solar power station. In 2017, researchers at the California Institute of Technology created a prototype for a modular power station, using thousands of ultralight solar cell tiles.

Another related news is that researchers at the University of Liverpool are working on a project to design and manufacture low-cost, ‘origami’ deployable structures consisting of thin-film photovoltaic cells incorporated onto a sail. A swarm of photovoltaic solar sails could be configured in-space to provide large-scale and versatile Space Solar Power (SSP) energy generation.

Also, the Australian-based company Solar Space Technologies, working in partnership with US-based Mankins Space Technologies, Inc. (MSTI), is planning to develop, manufacture, deploy and operate a solar power satellite (called SPS – ALPHA) into geostationary orbit to supply baseload energy to the Australian grid by 2027. SPS-ALPHA was first-examined under a NASA Innovative Advanced Concepts (NIAC) project (2011-2012). The newly proposed solar power satellite has been re-designed to be made up of many repeatable building blocks that can be assembled in space instead of manufacturing one, expensive, single large system. This approach makes the cost of building the platform much lower than if traditional satellite building approaches were. SPS- ALPHA platforms are sized to deliver 2.1 GW each at a levelized cost of electricity (LCOE) of 5¢ per kilowatt-hour ($, US) over a 30-year nominal lifetime.

Researches in Japan led by the Japan Aerospace Exploration Agency have been working on a project to build a space solar power station for a long time. They have already developed designs and demonstrated solar power satellite of sandwich type.

In my post “Solar energy interesting facts” I have mentioned that China has designed a space solar power system, which they aim to have operational by 2050. This system should be capable of supplying 2GW of power into Earth’s grid at peak performance.

It seems that scientists are already much closer to construct solar power stations in space. Currently, we are reliant on materials from Earth to build power stations but maybe one day we can use resources from space for manufacturing, such as materials found on the Moon.

The concept for constructing a space solar power station has fantastical origins but it is now being researched by several nations and many scientists around the world are working on it. Thanks to rapid advances in lightweight solar cell tiles and wireless power transmission technology it may become a future reality sooner than we could imagine.

Photovoltaics and the Space Industry