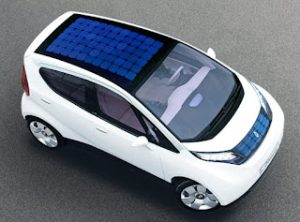 Another exciting news concerning electric vehicles coming this time from Europe. Italian car designer Pininfarina and French battery manufacturer Bolloré have officially announced that they will release in 2010 a fully-electric, partially solar-powered car in Europe, named BlueCar. Previously unveiled at last years Geneva Show, the BlueCar is a fully-electric car that comes equipped with solar panels on the rooftop. The solar panels on the vehicle’s roof provides some power to the vehicle’s systems.

The four-seat, five-door hatchback vehicle is 3.65 meters long, 1.72 meters wide and 1.6 meters high. The 50kW electric motor and the LMP (Lithium Metal Polymer) batteries + a device for energy storage (supercapacitor) give the BlueCar a range of 250 km (155 miles) per charge. With modest demands the battery is able to run the car at a top speed of 80kph and provides enough thrust to enable the car reach 60kph in less than 6.5 seconds. If need be, the batteries can be fast-charged for five minutes, giving the car enough power to run 25km.

The two companies claim that to recharge the BlueCar, you should simply plug it into a traditional power socket at home or a public power outlet. It takes about six hours to recharge the car’s battery from a standard power socket, and only two hours on the future public fast-charging outlets.

The car will go into production in Italy at Pininfarina starting in 2010. Production on an industrial scale will take place between 2011 and 2017, with 60,000 of the vehicles expected to be produced by 2015.

Read also the post: 5 Partially Solar-Powered Cars You Can Buy | Solar Energy – Green Lifestyle for You