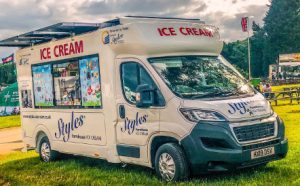 Image credit: stylesicecream.co.uk
Britain’s first solar ice-cream van is a concept of David Baker, the owner of Styles Farmhouse Ice-Cream, based in Rodhuish, Somerset. He designed Styles Solar Ice-Cream Van to reduce fumes from diesel engines at festivals. The Styles Solar Van idea came up to him in 2016 after customers, show directors, and event organisers complained about the diesel fumes from its regular vans.
The prototype was ready in 2018 and it consisted of four solar panels. The current model has eight solar panels and was ready in May 2019. Besides solar panels on the top, the van has a big bank of batteries inside. The solar panels and the battery storage power the freezers, ice-cream makers, and coffee machines. “In full sun the van can operate for up to five to six days. On cloudy days it will run for two to three days. The system can be fully recharged using mains electricity in just four hours.”- says Baker
The solar van is built on the Peugeot Boxer Van, though other van types can be used, too. Its latest Euro 6 low emission engine will get you wherever you want but when you are on site selling ice-cream you can rely entirely on solar energy.
The Style Solar Van has been serving ice-cream to thousands across the UK five months of the year. Baker says that his team has attended around 160 events, including music festivals and agricultural shows. He estimates that solar energy saves him around £4,000, or nearly $5,000 a year.
Baker’s family has farmed 300-acre land for 119 years. They were growing wheat, barley and oats, and milking cows and sheep. In 1988, Baker decided to diversify his business into making and selling luxury ice-cream in order to get more income.
Currently, Baker concentrates more on the ice-cream side of the business while other farmers cultivate crops on his land and milk the cows. Styles Farmhouse Ice Cream now has 50 employees and supplies 250 luxury ice-cream shops and works events.
On 3 December, 2019, Styles Solar Ice-Cream Van participated at Somerset County Council’s climate emergency business summit, at Taunton Rugby Club. The van was an example of how local businesses are responding to climate change by reducing their carbon footprint. This summit is part of the county council’s plan to work towards making Somerset carbon-neutral by 2030, by involving local companies in strategies that will help reduce air pollution.
The eco-friendly vehicles officially debuted at the Ice Cream and Artisan Food Show in Harrogate, the United Kingdom which took place between 11-13 February, 2020. Styles Solar Ice-Cream Van is now available commercially and it can be ordered here.
Sources: darigold.com & wsfp.co.uk