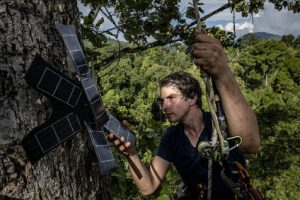 Image credit : The New York Times
As we all know the forests (including rainforests) are essential for our planet. Millions of people depend on them for their livelihoods and they can help combat climate change by absorbing carbon dioxide. Unfortunately, poachers and illegal loggers do not interested in it. So, how to save them? Topher White, a physicist, and engineer have a brilliant idea of how to save the rainforests with the help of solar-powered used smartphones and advanced AI training platform (Google technology called TensorFlow).
The idea came to him in 2011 during a trip to Borneo, Indonesia. He was visiting a gibbon reserve in the heart of the rainforest when he stumbled upon logger illegally cutting a tree. Most surprising for him was that the man was working only a few hundred meters from the rangers’ cabin. Covered by the usual noises in the forest as the chirps of birds, the buzz of cicadas, the banter of gibbons, the sound of chainsaws went unnoticed.
After returning to the United States, Topher White developed a solar-powered device and later founded San Francisco-based non-profit Rainforest Connection. The device consists of an old Android smartphone equipped with highly sensitive microphones that record the sounds up to three square kilometers around. When the sound of a chainsaw is detected, the phone sends a real-time alert to the cloud server that sends a notification to the rangers, who can then get the logging stopped. Detecting the sounds is possible thanks to the AI system that can be trained to identify all kinds of sounds, from mechanical sounds like chainsaws to the sounds of specific animal species.
A homemade solar panel system, also made from recycled materials, power the listening device despite the shades in the rainforest. And surprisingly, even in remote forests, you can often get decent cell reception that makes sending the alert possible.
At first, White had an intention to use commercial solar panels, but he hadn’t considered that the diminished sunlight under a canopy of trees could be a problem. Doing research, he found some papers from the 1950s and 1960s that mentioned sunflecks – transient spots of direct sunlight. “It turns out that 80 or 90 percent of the solar radiation that makes it through the canopy comes in the form of sunflecks,” White says.
D2solar, a solar-module prototyping firm in San Jose, Calif., helped White to design special flower-like structure, with the phone in the middle, and small solar panels sprouting as petals. These solar panels generate enough power for the phones, even under the forest canopy. They use discarded strips of monocrystalline panels and cut them into petal-shaped patterns. Each petal consists of three 0.5-volt cells, wired in series, and seven petals are then wired to each device in parallel.
“The idea was to space the petals based on the average diameter of the sunfleck and to distribute them as widely as possible around the device so that at any given time there was a high probability that the sun would be striking all the cells on a petal,” White explains.
“I was surprised that it worked,” says Michael Rowell, who was working at D2solar as an R&D engineer at the time. “If you stick a normal solar panel in the jungle, it won’t work no matter how big it is.” White’s solar flowers generate 1.5 V, which he boosts to 5 V using a simple circuit. And finally, his rainforest protective solar-powered devices were ready to be placed high up in the tree where they will be invisible.
Between 15 and 30 percent of wood traded on the global market is harvested illegally, according to the United Nations Environmental Programme and Interpol. In key tropical countries, illegal logging accounts for 50 to 90 percent of all forestry products on the market. White says that deforestation is a bigger contributor to the greenhouse gas emissions than all the world’s vehicles combined – cars, trucks, trains, ships, and planes.
White overcame many obstacles and complications to bring to the reality his simple solution. He now spends nine months out of the year installing and troubleshooting the “forest guardians”. Today, listening solar-powered devices are saving trees in Indonesia, Brazil, Cameroon, Ecuador, Peru, Bolivia, and Nicaragua. White won the support of the non-profit organizations, tribes, and local communities. And something very important, he’s won the support of environmentalists and forest law-enforcement groups. Randy Hayes, the founder of the Rainforest Action Network, calls White’s system “a powerful tool that could do a lot of good on the planet.”
Sources: spectrum.ieee.org & thejakartapost.com 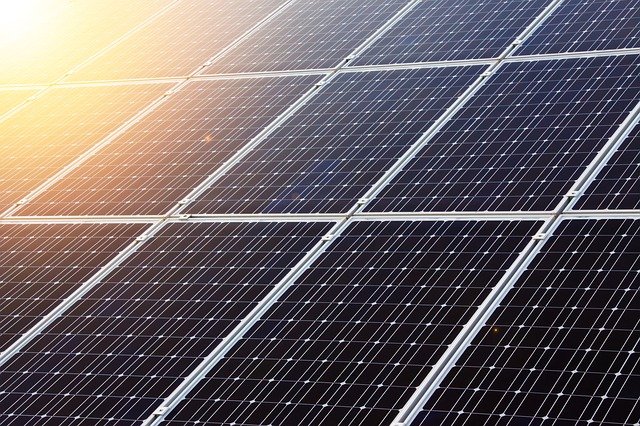