For about five years, scientists have been working on methods to develop transparent solar panels capable to convert the light that shines on them into electricity. Now, this is reality.

In 2014 the team of scientist Richard Lunt from Michigan State University developed a transparent luminescent solar concentrator that looks just like a piece of clear glass, but which is covered in small organic molecules that can absorb specific invisible wavelengths of sunlight.

In their latest study, Lunt and his colleagues examined the efficiency of this kind of transparent solar tech, and estimate that if the see-through panelling can be scaled up to cover the estimated 5–7 billion square meters of glass surfaces throughout the US, it could potentially supply around 40 percent of American energy

This type of solar materials captures just ultraviolet and near-infrared wavelengths of light. The visible light that enables human vision isn’t obstructed, which is why we can see through the cell.

Although, transparent solar panels are only 5 percent efficient compared to conventional solar panels with their 15–22 percent, they have great potential.

“We analyzed their potential and show that by harvesting only invisible wavelengths of light, these devices can provide a similar electricity-generation potential as rooftop solar while providing additional functionality to enhance the efficiency of buildings, automobiles, and mobile electronics.”

The ultra-thin, transparent solar panels could be applied potentially onto skyscrapers and car windows, cell phones as well as other objects with a transparent surface. Which means that existing windows and screens would not need to be replaced in order to generate electricity from buildings or electronic devices. 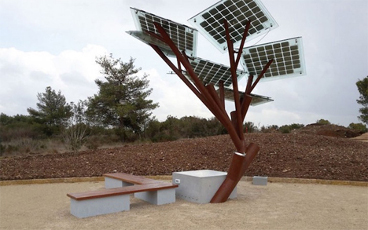